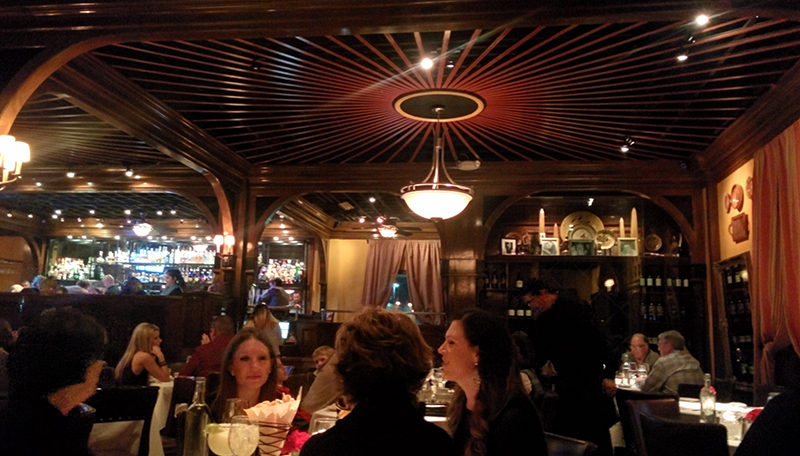 I  love Texas and Texans — their ebullient spirit and can-do enthusiasm. “Go big or go home” well sums it up!

While I’ve had many reasons to be in Dallas, Houston has not been on an itinerary for too many years. A lovely invitation to speak at the Theta Charity Antiques Show, “London’s Calling,” was the perfect occasion to correct that!

Staying with a dear friend made it all the more inviting and her gracious cocktail buffet party made it all the more delicious. The Veuve was flowing and the menu was titillating — from the exotic…smoked duck and apple saffron crepes…to the can’t-live-without… jalepeño cheese grits and shrimp, finishing off with “fall pear bruschetta with hazelnut creme and crystallized rosemary.”  And how clever is this? I’m definitely going to try serving my favorite appetizers, smoked salmon with creme fraiche and caviar, on a spoon, rather than toast.

While nibbling away, I was able to get the insider’s view of Houston from some of the tastemakers at the party (hostess Kim Tutcher, Ruth Kneese, Ronda Carman, Linda Triplett and Elyse Kalmans). Though very well intended, my brief time didn’t permit me to squeeze in a visit to all these great resource (but I did make a dent)… which gives me many fabulous reasons to return to Houston!

Here are my notes for your next trip, too.

La Colombe D’Or: Almost as good as staying with friends. This hideaway has five, art-filled suites and nine villas, each featuring décor and appointments chosen specifically for the expansive, residential-style accommodations.

Armandos: A Mexican mainstay for the in-crowd, donning hip threads to match the top-shelf margaritas.  Sophisticated environs are the finishing touch.

Tiny Boxwoods: It’s an upscale, yet casual cafe serving classic lunch fare amidst lush greenery that feels like a private garden party in the middle of Houston. Famous for their “to-die-for” warm chocolate chip cookies.

Goode Company BBQ: Where to go for the real “Texas BBQ experience.”

Houston gives new meaning to “retail therapy.” Shopping in this oil town can understandably be described as “noteworthy.” In their new “River Oaks District” stand-alone boutiques (with BIG names — Dolce & Gabbana, Roberto Cavalli, Van Cleef & Arpels, Etro, Brunello Cucinelli, John Lobb, Hermès, Dior, Stella McCartney and Harry Winston) are clustered now on two to three blocks to provide that lovely, old-fashioned shopping experience, in the open air, where you are able to stroll from one boutique to another (Atlanta has also carried this out in Buckhead).

And these are joining a line-up of established Houston-grown, “smaller name” boutiques that are scattered throughout the Kirby shopping area (distinguished at holiday time with festive and large bow decorations that really get you in the mood….remember, we’re in Texas).

Don’t miss these boutiques; each deserves to join your list of must-dos in 48 Hours.

A’Bientôt: Lovely Betty Newton and her partners know how to provide bling, accessories and can’t-pass-up classic finds with an eye for VALUE. Fabulous for costume jewelry and “the perfect gift,” like these monogrammed, faux cashmere throws (added immediately to my Christmas list for friends.)

Ann Mashburn: Her long shirts in Liberty-like prints and ginghams are now hanging in my closet. Just two stores down from A’Bientôt, with Houston jeweler (and Newport Flower Show favorite) Mariquita Masterson in between. 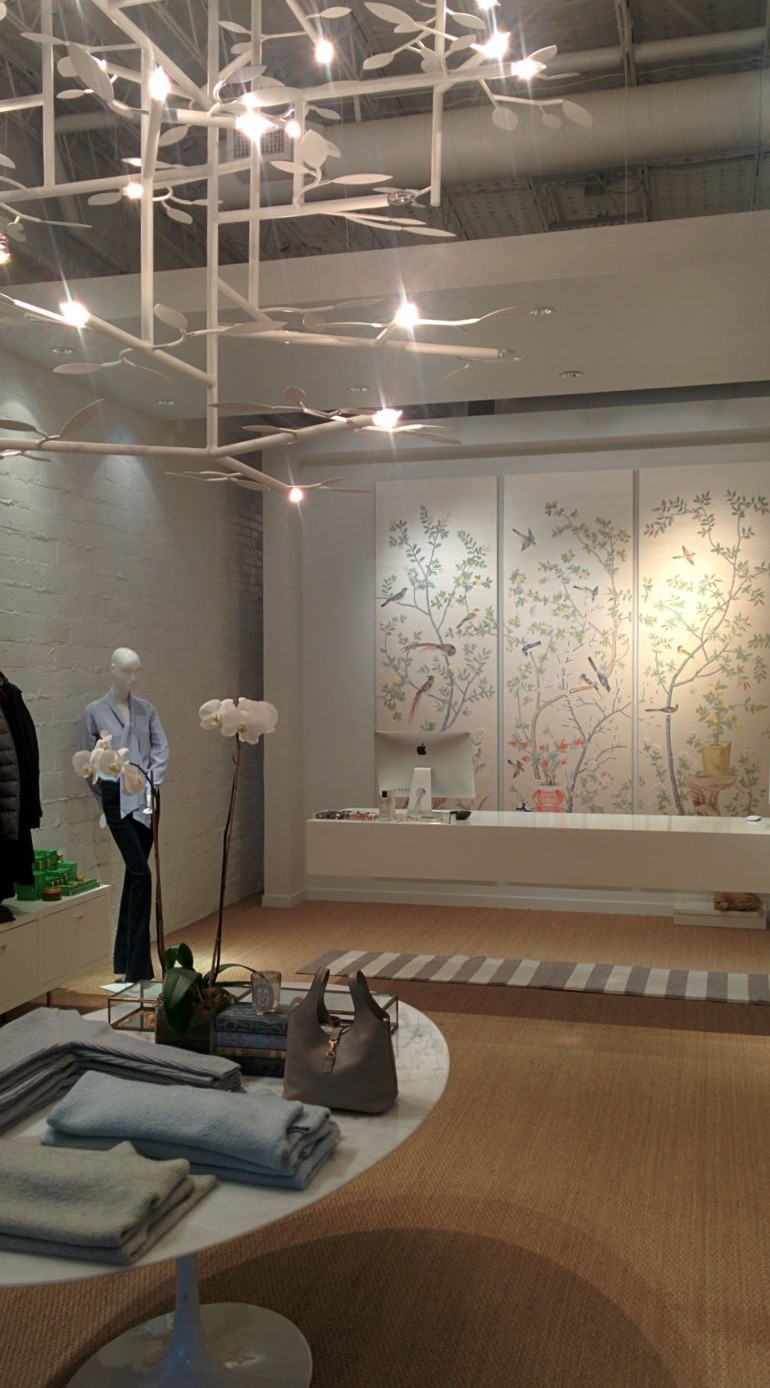 Joseph: For a shoe line-up to die for.

Laboratoria:  A hidden gem in the heart of River Oaks, stocking under-the-radar European designers like Rochas, Viktor & Rolf, Public School and No. 21.

Area: The fabulous home décor store in Highland Village; the loft-like space is a favorite of local designers.

Just a quick note, or I’d be remiss — Houston has always had a clear and defined art culture, long before many other southern towns — and that was made clear again while I was visiting. Both Mark Rothko (a retrospective at the Museum of Fine Arts, Houston) and Frank Stella (at the Meredith Long Gallery), two grand-daddies of the modern art world, had shows going on at the same time. (Note: Rothko first showed in Houston in 1957, initiating a conversation between Dominique and John de Menil and the Abstract Expressionist which resulted in the renowned Rothko Chapel commissions.)

The Rothko Chapel: This “pilgrimage stop” for thousands of visitors is a cultural masterpiece where religion, art and architecture intermingle. Commissioned for Houston, The Rothko Chapel is comparable in international importance to the Chapel of the Rosary in Vence, France by Henri Matisse.

The Menil Collection: Within the four areas that largely define the collection—Antiquity, Byzantine and Medieval, Tribal, and Twentieth-Century Art (with a concentration in Surrealism)—one finds a selective approach to acquisition that yields depth with regard to particular areas and artists.

ALSO, be sure to check out the thriving art scene in Midtown!

Special exhibits of Fabergé treasures curated from the private world-renowned McFerrin Family Collection of Fabergé at the Houston Museum of Natural Science (the current show, “From a Snowflake to an Iceberg,” highlights 500 jeweled pieces). 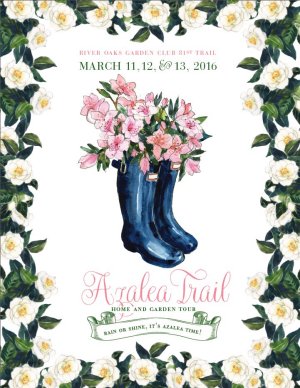 The Art Car Parade: Sponsored by The Orange Show Center, hub of Houston’s folk art activity. Entries include anything on wheels. As the parade grows over the years, attracting more and more participants, the complexity and artistic quality of the entries increases. (April 7th-10th, 2016)

Hope you have Houston in your future travel plans! 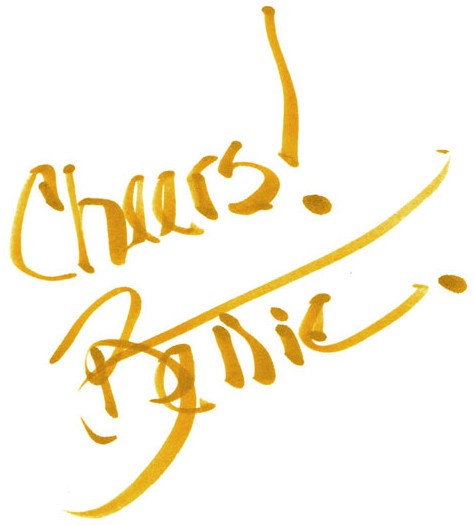 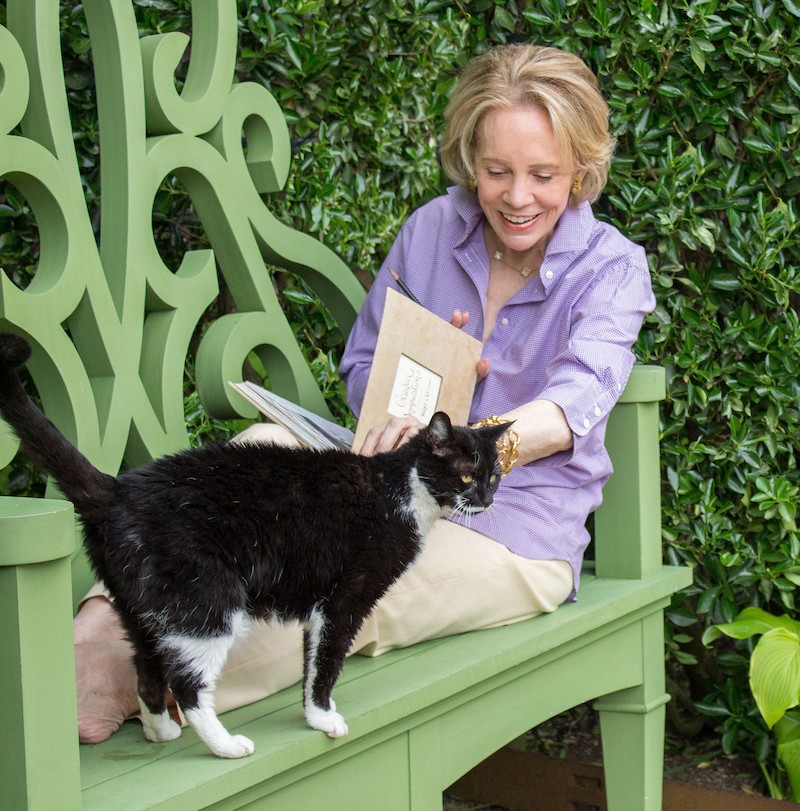 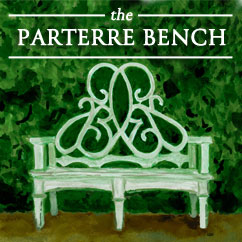 Time to show off the Cutting Garden, that is a ...

So thrilled with this enthusiastic bloomer, ...

2989 40
Open
So thrilled with this enthusiastic bloomer, Clemat

The summer-white Parterre Bench has a bird's ...

So glad I took these pictures of my beloved rose ...

A peaceful all-green scene outside the mudroom ...

Newport’s signature pink rhododendron are ever ...